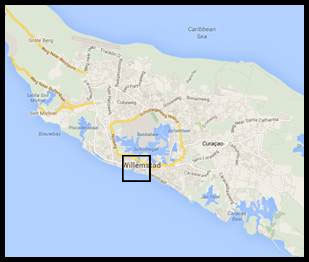 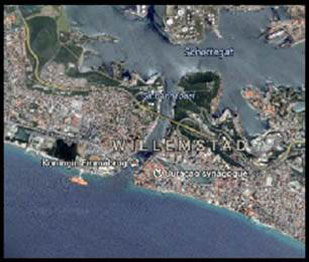 The good trade in Willemstad attracted all kinds of businessmen, including the Jewish community settled in this district. The Maduro family (one killed descendant of the Maduro family was honored with the Hague Madurodam!) has played a major role in the development of the city and is still an important (bankers) family on the island. The 17th-and 18th-century Dutch colonial buildings were built according to Dutch standards, but adapted to the Caribbean tropical conditions. Thu s appeared verandas, porches, fretwork and shutters.

The early city can be divided into two neighborhoods: Punda and Otrobanda. The first was Punda (the point). It got that name because of its shape; it was enclosed by walls on three sides to protect European settlers. The wall remained intact until 1860. Along the current Columbus Street, Madurostraat and Handelskade the Protestant Dutch traders built their offices, warehouses, shops and living spaces.

The buildings in Punda are generally brightly colored. The first houses in Punda, the heart of Willemstad, were in fact outright replicas of Amsterdam townhouses. But soon the building blocks for those homes proved to be not adequate for the tropics and the indoor temperature was uncomfortably high. There were houses that were built so that the strong trade winds could blow through.

The infrastructure of this district with its narrow perpendicular streets is still hardly changed. Most of the buildings have been well maintained over the centuries and restored. The most obvious is of course the Handelskade with brightly colored houses, one of the most photographed places on the island. Characteristic of the Curaçao architecture is the plaster intended to camouflage the irregular building material, coral stone and rock. For the real ornamental work “ijssel” stones were used, who previously served as ballast on board Dutch merchant ships.

The first building permits for Otrobanda (‘the other side’), on the other side of the bay of Punda, were granted in 1707. The first building was limited to warehouses and simple houses of one storey, later came the Broad Street (Otrobanda’s main shopping street) larger premises on the ground floor retail and warehouse space and above a house. In the 18th and 19th centuries, the black workers, former slaves, from the countryside came to town and settled in this neighborhood. In 1774 Otrobanda was with three hundred houses as large as Punda. Otrobanda was unlike Punda not fenced, so there was more room for grander homes. In the yard of a large house, smaller houses were built, and so a whole family often stayed together at Kura. The houses even had a garden, something you did not encounter in Punda. By the 20th century, part of Otrobanda was an important cultural center for the emerging black middle class. Many of the leading higher education, politicians, artists and musicians on the island grew in Otrobanda. Later traders from the Middle East settled here. Otrobanda has always been a true melting pot: all ethnic and religious cultures lived and continue to live together.

In Punda you will find many homes, hotels, apartments, shops and offices. Many people work there, rather than that they live there. There is an abundance of cafes and shopping. Obviously, the primary features such as super markets, schools etc. exist but you will also find a large cinema, various clubs and big sailboat “The Insulinde”. In Punda you will find little to no “gated communities” and these areas at night and evening can therefore sometimes be perceived as unsafe.

Punda is fancier, more expensive and more polished, but at night you can hear a pin drop. Otrobanda is livelier, noisier and there is much more street life.